Through the previous articles of the Structured Learning for Awareness in Media (SLAM) project, you could get acquainted with the definitions and characteristics of fake news, and its presence in Turkey, Albania, Italy, Bosnia, and Herzegovina, and Serbia. Now it is the turn to have an insight into the „organized fake news and disinformation campaign“ in Montenegro, one of the countries participating in the aforementioned SLAM project.

Tensions surrounding the new Montenegrin law on Religious Freedom are quite high since the law was passed within the Montenegrin parliament at the end of December 2019, directly affecting the property of the Serbian Orthodox Church. The distribution of the law also led to tensions between Montenegro and Serbia.

The day the law was being voted on, an event occurred within Montenegro’s Parliament and 24 people including 18 MP’s from the Democratic Front were detained. Since then, daily protests by citizens occurred in Montenegro, largely by those that declare themselves Serbs, expressing dissatisfaction with the law.

Despite disagreements, the law came into force on January 8. Consistent with the disputed Article 62, religious communities in Montenegro got to prove property ownership before 1918, otherwise the property will belong to the state of Montenegro. All these things mean that the Serbian Orthodox Church must prove ownership of the property including medieval monasteries and churches, as well as everything built before December 1, 1918, when Montenegro became a neighborhood of the Kingdom of Serbs, Croats, and Slovenes.

In January 2020, Montenegrin Culture Ministry stated that Montenegro faces an unprecedented disinformation campaign, which culminated in weeks following the adoption of the Freedom of Religion law. It had been a coordinated campaign to spread fake news by a variety of media outlets within the country and the region which are calling for religious and national [ethnic] hatred and violence in Montenegro.

The two editors of the in4.net and borba.me were taken into custody for inducing panic in a public space because of publishing information about an explosion in Vila Gorica Palace, during which senior state officials, including Montenegrin President Milo Đukanović, organize receptions for distinguished guests. After they published their stories, some regional media republished the “findings”. The police later denied the report and said that a minor electrical failure had occurred at the villa, which was soon repaired.

The Police Directorate said Raičević and Živković were arrested because they publicized the news without checking them before. But after his release, Raičević said he had double-checked the information before it had been published and claimed that his arrest was really about intimidating journalists. Journalists’ associations, civil society groups, and opposition politicians warned that the arrests were a violation of media freedom.

The European Commission warned that journalists got to be ready to work safely and without worrying about harassment, political pressure, censorship, or persecution. On the eve of Orthodox Christmas, Montenegrin police arrested Angela Đikanović, the editor-in-chief of Montenegrin Fos Media portal. Đikanović had published false information that 250 members of Kosovo’s special police unit ROSU would assist Montenegrin colleagues in securing law and order on Christmas Eve.

The editor–in–chief of the Fos media website, Angela Đikanović was placed in detention for 72 hours for “causing panic and disorder” after claiming in a piece of writing that the government might turn security forces in neighboring Kosovo to assist quell Serbian Orthodox Church supporters’ protests over the new legislation on religion.

Police arrested Đikanovic for reporting that Kosovo police Special Forces were poised to intervene in Montenegro over Orthodox Christmas. The new law on religion has sparked a series of protests led by Serbian Orthodox Church officials who claimed that the legislation paves the way for the seizure of the church’s property.

After the Council of Europe reported the arrest of Đikanović, the Foreign Ministry insisted that the arrest didn't affect media freedom in Montenegro or compromise the safety of journalists. The Ministry said Đikanović should have checked the information before it had been published.

“There are indications that the location of this information was an effort by a 3rd party to interfere in Montenegro’s internal affairs to destabilize the state and disturbing law and order,” the Ministry said on January 10, 2020.

Given that the coronavirus pandemic had made the traditional election campaign impossible, political parties chose an online space, i.e. social networks, to run a political campaign and present programs. In Montenegro, it was mostly Facebook as the most used social network.

Journalist and founder of several online platforms, Duško Mihailović, agrees that a jump in the dissemination of false information was expected in the pre-election period. The number of web pages without the Impressum and physical address had increased.

The digital forensic center was engaged in disinformation campaigns and spreading fake news on FACEBOOK. The DFC detected that unprecedented disinformation campaigns aimed at Montenegro from the same addresses as in the past were intensified during the election campaign. According to Borislav Visnjic, Russia, which uses pro-Russian media from Montenegro, but also Belgrade, has been singled out as the main threat in this regard. “The narratives for this purpose are that Montenegro wants to revise history, that NATO membership is not useful, that the countries of the Western Balkans are weak and corrupt as if the EU and the Alliance are weak and divided.“

It has been announced from Facebook that it will launch an independent fact-checking program in Montenegro with one Montenegrin non-governmental organization. According to the explanation, certain information will be marked as false and in that way, their visibility will be reduced. 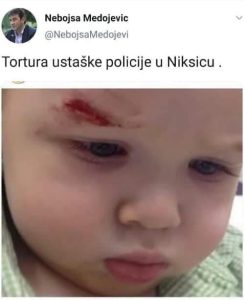 A photo of a boy Andrija with an injury to his temple, which was allegedly taken as a result of a clash between protesters and police in Niksic during a protest over the arrest of a SOC priest, was widely shared on social networks.

The photo of the injured boy is accompanied by a comment that the injury was the result of “police brutality”, and that it was “torture of the Ustasha Police in Nikšić”.

The picture does not show the boy Andrija from Nikšić, but Vigo from Boston in Massachusetts. The photo was taken in 2012, as shown by a Google search that leads to the Flickr page where it was originally posted.

During the coronavirus pandemic, several measures were, and still are, in place to combat the spread of the virus. Locking and banning movement for a certain period was the best and easiest basis for making up fake news.

In December 2020, the movement restrictions of citizens in Podgorica were from 19 to 5 o'clock. However, the alleged PrintScreen from the Vijesti portal could be seen on social networks in the same period. That PrintScreen states that movement is prohibited from 13 to 5.

However, the National Coordination Body and the Vijesti portal stated that no extraordinary decisions had been made, that this information had not been published on the mentioned portal, and that it was a matter of editing. 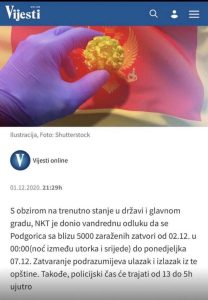